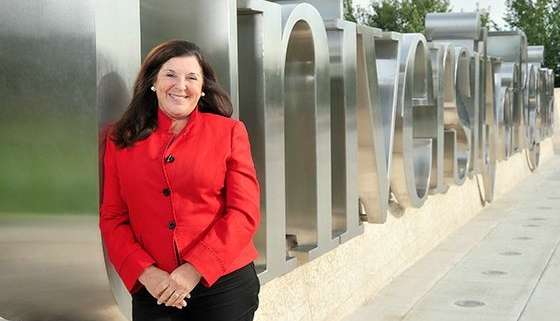 Regina – YWCA Regina’s Nutrien Women of Distinction Awards is pleased to announce that Dr. Vianne Timmons, O.C. has been selected as the recipient of the 2019 Lifetime Achievement Award. Vianne is a nationally celebrated leader and educator, having been named as an Officer of the Order of Canada in 2017 and one of Canada’s “Top 100 Most Powerful Women” for 4 years. Professionally, Vianne has been serving the University of Regina as the institution’s first woman President and Vice-Chancellor for the past decade. Across Canada, less than 25% of university presidents are women, a statistic Vianne is committed to changing.

The Lifetime Achievement Award is granted annually by a selection committee whose decision is based on four criteria: the recipient must be a woman of influence, a woman of exceptional accomplishment, a woman of exemplary character, and a woman of endurance.

“We are very excited that Vianne is accepting this year’s Lifetime Achievement Award,” says Melissa Coomber-Bendtsen, CEO of YWCA Regina. “Vianne fearlessly uses every opportunity she can to bring voice to all women. Her commitment to changing the course for future generations of women while lifting women up as she succeeds are testaments to her strengths as a feminist and leader.”

Born into a coal-mining family and raised in a small community in Northern Labrador, Dr. Vianne Timmons credits her modest and humble upbringing for encouraging her success in leadership. In 1983, Vianne completed her Master of Education degree in Special Education from Gonzaga University, and she then went on to complete her PhD in Education Psychology from the University of Calgary in 1993. Since 2010, she has hosted the Inspiring Leadership Forum, an annual event that explores the power of women’s leadership for people of all genders across southern Saskatchewan.

“Receiving the Lifetime Achievement Award from YWCA Regina is an incredible honour,” says Timmons. “The organization does so much in our community to promote gender equality, enhance the status of women, and serve families. Celebrating women’s accomplishments is an important part of this, and something that I hope will help inspire the next generation of leaders.”

Since 1981, YWCA Regina’s Nutrien Women of Distinction Awards have recognized women whose outstanding achievements contribute to the health and future of our community and are an inspiration to others. Nominees will be celebrated at the 38thAnnual Awards Gala taking place May 2.

To nominate a woman for an award, purchase tickets to the Awards Gala, or learn more about the Awards, please visit https://womenofdistinctionregina.com.