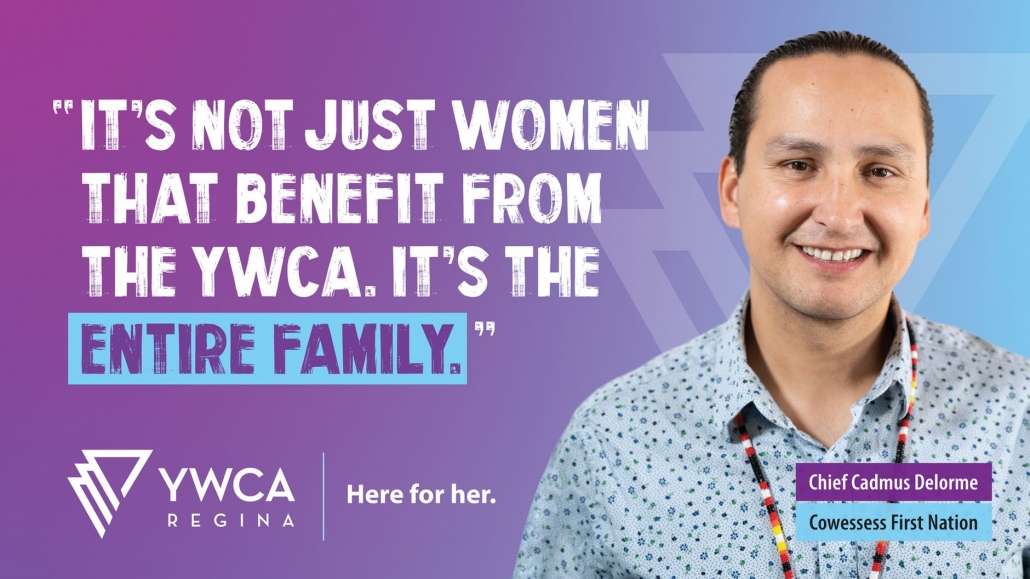 Cadmus Delorme, Chief of Cowessess First Nation, is a Champion of YWCA Regina. We spoke to Cadmus recently about the contributions YWCA makes in our community and here is some of what Cadmus had to say…

I am a huge fan of the YWCA.

I’m a Cowessess First Nation citizen. Grew up on, live on Cowessess today, but Regina has always been my city. I have a lot of family and friends in Regina. Females are, have always been, people I have surrounded myself with regards to leadership and I’ve heard great stories, but sometimes I’ve heard some of the more challenging stories and the YWCA has always come up in the conversations regards to: ‘Who’s helping you?’.

As a chief I rely on places like the YWCA.

Everybody has their own journey, story. Some are succeeding. They’re living their dream. Some are aspiring to hit their dream and just one day at a time and there’s some who just are at that poverty level due to inter-generational trauma, due to ignorance, or privilege, just can’t seem to get up to that standard level.

YWCA provides training to help deal with these challenges.

I don’t feel we share enough success stories on what institutions like the YWCA are doing for the Regina area.

There’s no limit to the benefits the YWCA can play. From an indigenous perspective females run the nation; they run the tribe.

Sometimes it’s the hardest person to be in this country, is an indigenous female, and so you have places like the YWCA that know the end goal. That Indigenous women, women in general, are the leaders and they’re there to dust them off.

The YWCA, being led by women, is strengthening the home fires. When you have strong women in homes, you have better homes.

It is already a leader. It just has to be more emphasized at what the YWCA does and the impact that it makes.